If your hard drive is failing, it can prevent the Update CD or DVD from writing to your drive, causing the update to crash. Unlike firmware updates in the computer industry,  MyGig firmware updates are not written to be fault-tolerant during installation. This can leave your firmware in an inconsistent state; or worse, with corruption that prevents your system from switching into "Emergency Update" mode. Normally after an update crash, your system will give you the option to resume with an "Emergency Update".

If your system boots into "Emergency Update" mode, to avoid creating a problem you can't fix, restore or replace the drive that caused the update to crash before you make another attempt to run the update.

Before you install a MyGig Software Update, check the problems usually caused by a failing hard drive.

A Warning:   Many Owners contact us after making 1, 2 or 3 attempts to run a MyGig software update with a bad hard drive. At this point their screen shows nothing or the controls aren't working, or their system is constantly restarting. It may be too late to fix a system with these problems.  Check the "Last Chance" test below.  (not for RHB or RBZ)

The Test (not for RBZ or RHB)

These MyGig behaviors mean you can test to see if a new hard drive will solve your problem without buying a new drive.

If your MyGig system is rebooting, or the screen is blank or the controls are not responsive following a failed update, remove your hard drive to see if it boots into "Emergency Update" without the hard drive. If so, don't attempt to resume the update until you have installed a new MyGig hard drive.

If "Emergency Update" is available with the drive disconnected, this proves your hard drive was causing your system to be unresponsive. You should now be able to complete the update after you install a good MyGig hard drive.

If your system has the same problem with the hard drive removed, there is no do-it-yourself solution. The unit will have to be exchanged through your car dealer or repaired by a Navigation System Repair company. 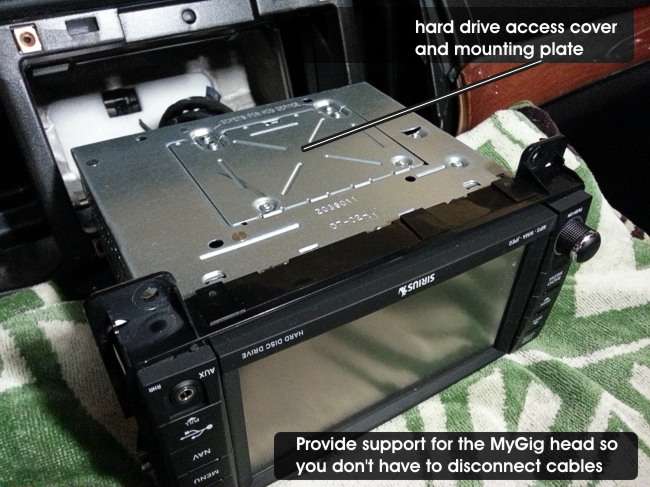 Don't pull on the hard drive ribbon cable or the IDE connector. Carefully release from underneath with a sharp pointed knife a little at each end a couple of times

When you reconnect your drive, be careful align the connector as shown. Its very easy to plug the connector in wrong, shifted left/right or inverted. 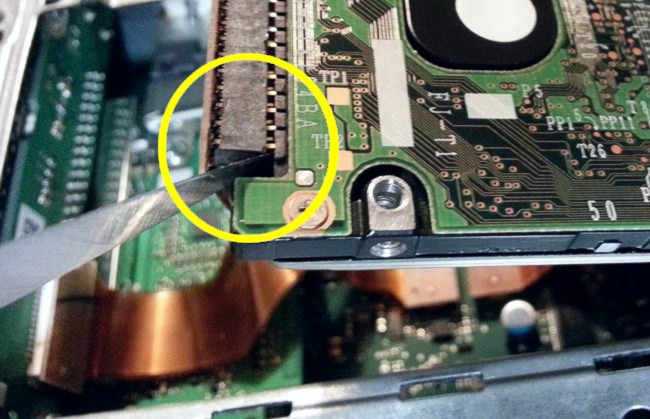